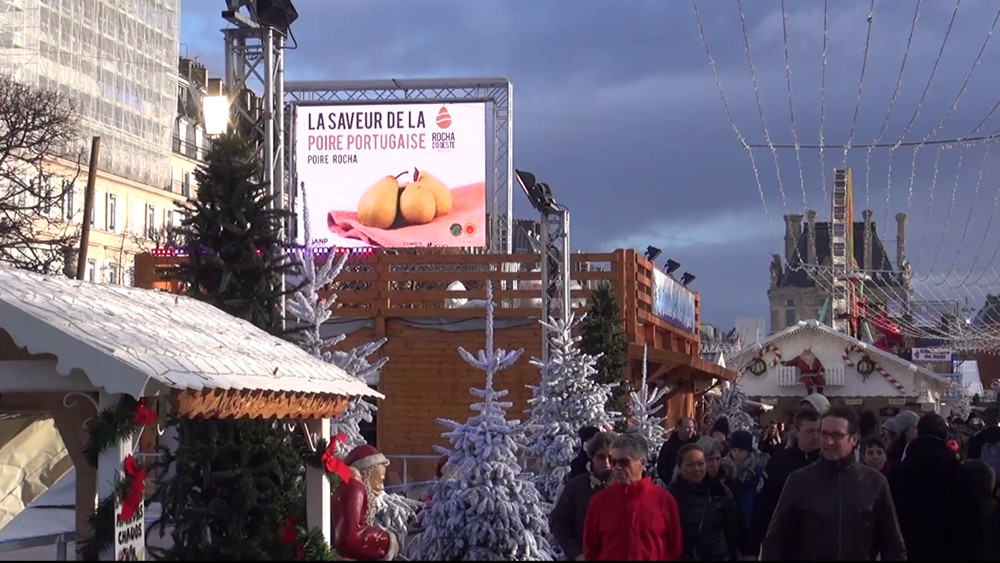 Pera Rocha do Oeste is on display at the great Paris Christmas fair, Magie de Noël aux Tuileries, right outside the Louvre, as from this Friday. The video advertisement, which stars the Portuguese variety, is being broadcast on a giant screen at the event, which runs until 6th January 2019. The advertising campaign promoted by ANP – Associação Nacional de Produtores de Pera Rocha (National Association of Rocha Pear Producers) wants to make this 100% Portuguese fruit variety much more familiar to the French market.

The 15-second advertisement is broadcast four times an hour at an event open to the public 12 hours a day, over the course of 39 days. Magie de Noël aux Tuileries takes place in the Tuileries Garden, situated on the right bank of the Seine and facing the entrance to the most visited museum in the world, the Louvre, and stretches down the Champs-Élysées. The organisation is expecting at least 15 million visitors.

“This is a fantastic occasion for us to show Pera Rocha do Oeste to the French consumers, and also to the millions of foreign tourists who visit Paris during this Christmas season. On the one hand, we want to say that we’re already present in the French market, where this variety is known as ‘Portuguese pear’. And on the other hand, we want to raise awareness of this fruit’s natural territory, the orchards of the Portuguese Oeste”, states Domingos dos Santos, the chairman of ANP.

This action is taking place a month after another promotional activity set up in the streets of Paris for one week, with 340 mupis with a close-up of Pera Rocha, also with the idea of reinforcing the differentiation of this exclusively Portuguese fruit. ““The flavour of Pera Rocha, the Portuguese pear” was the campaign’s slogan, which now has a new chapter, in video format. With the Oeste region as a back-drop, the advertisement reinforces Pera Rocha’s flavour and freshness.

France is Pera Rocha’s fourth biggest export market, having received over 13.4 thousand tonnes of this fruit during the 2017/2018 marketing season. During this season, the Portuguese variety is on sale in some of the principal large retail banners in the French market.